There are two types of shoulder dislocation.

In the most favorable case, the moving humerus head injures neither the bony edge of the socket nor the glenoid labrum (= meniscus-like cartilaginous ring that increases the glenoid cavity surface) during luxation, but merely breaks the joint capsule. After three weeks of complete rest with a Gilchrist bandage(the angled arm is fixed to the body) the capsular tear heals, the shoulder will remain permanently stable.

In the worst case the luxating humeral head also injures the anterior glenoid rim and the labrum. 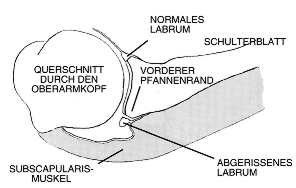 Cross-section through the shoulder.

The glenoid labrum is torn off the front, normal at the back.

Both structures have, despite immobilization, a relatively poor tendency to heal, so that recurrent shoulder dislocations can take place.

The younger the patient, the greater the danger that his shoulder will dislocate again.

Such shoulders must be stabilized surgically (usually arthroscopically, occasionally open), especially as the forecast for the shoulder joint can worsen after every dislocation, because each time the acetabular rim, labrum, joint capsule and cartilage layer are damaged.

The non accidental dislocation of the shoulder can be caused by a small socket, wrong socket tendencies, a thin joint capsule, a lack of labrum or an unbalanced muscle activity. The first dislocation in the context of this disease usually happens during an awkward movement (coat dressing, jumping into the water, throwing something), the patient is usually capable to reset the shoulder without medical assistance, however runs into the danger of suffering further dislocations in new extreme movements .

Some patients may even willfully and painlessly straighten or dislocate their shoulder.

This kind of luxation is often multidirectional, ie, not only forwards but also downwards or backwards, and requires a differentiated therapy.

The operation is preceded by a systemized clinical examination, a special X-ray and magnetic resonance tomography, as not every dislocation is treated similarly.

In case of a normal socket (size, shape and slope) and a lack of glenoid rim fractures, arthroscopic surgery is required (with all the advantages of arthroscopy - see general part).

Under arthroscopic observation, the torn labrum is fixed to the acetabular rim with a special stitching technique and the loose joint capsule gathered so that the humeral head can no longer leave the glenoid. 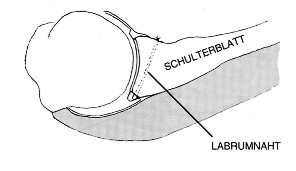 Arthroscopic suture of the torn labrum, through the neck bones of the shoulder blade.

The sagging joint capsule is gathered by more sutures.

If the glenoid is too small, too low or inclined too far forward, or even broken at the front, the arthroscopic operation can not be performed.

In an open surgery (incision in the axilla extension, about 10 cm long) each present defect will be removed. Thus, in case of a too flat or too small glenoid, a bone graft from the own iliac crest is used to enlarge the glenoid.

In the very rare case of multidirectional instability (the shoulder also dislocates backwards and downwards) a capsular shift operation must be performed (T-shift).

2. The usual (habitual, not accidental or even arbitrary) shoulder dislocation is to be treated differently. 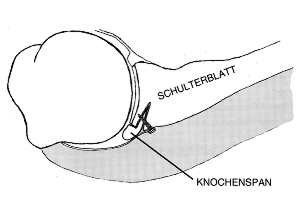 The front edge of the socket is enlarged by a screwed bone graft.

For this group of patients it is worth trying to initially use a conservative treatment, in the absence of acetabular rim fractures.

In therapeutic exercises the appropriate muscles are strengthened and movement patterns, that will help to avoid the luxation are learned.

If this does not lead to success, the shoulder is stabilized in an open technique with a capsular shift operation.

After the arthroscopic surgery complete rest with a special bandage follows (the arm is fixed to the torso) for four weeks. In the 5th and 6 Week pendulum exercises are performed and from the 8th week onwards also overhead movements.

In case of an open surgery, all procedures are extended for two weeks. The hospital stay lasts only a few days. Under ideal conditions, arthroscopic surgery can also be performed on a day-case basis.

After an arthroscopic shoulder stabilization, office work can be started with the bandage after about five days, after an open surgery after about ten days.

Heavy physical work should be avoided for around four to six months.

After four to five months, you can start with not too shoulder-stressful sports.

Contact sports, skiing, tennis, athletics, volleyball, etc., can due to the shoulder strain, exercised only after nine months.

About 95 percent of the operated shoulders remain stable, in more than 90 percent cases a painless or nearly painless, freely movable shoulder can be achieved. The arthroscopic surgery is better for pain relief and movability.

The rate or re-luxation (renewed luxation of the shoulder despite surgery) can be reduced to below 5 percent with the above mentioned differentiated approach.

In about 3 percent of arthroscopic surgical patients, a temporary feeling of disorder in the hand may occur, due to the operation-related arm strechting.

The infection rate is in an arthroscopic shoulder surgery at 0.014 percent, in open surgery at about 2 percent. These infections remain mostly surfacial and have no negative impact on the end result. 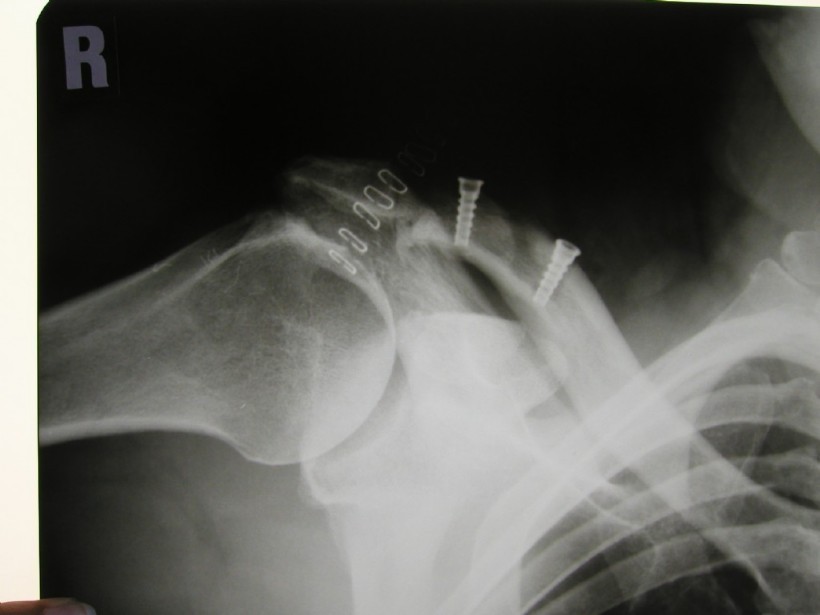