(Axis correction of O or X-legs)

Stage 4 of the treatment of osteoarthritis

A stronger deviation of the knee joint axis can be congenital or acquired.
A congenital X or O-leg, by one-sided load of a knee section can lead to its abrasion, meniscal and cartilage wear and damage.
In such cases - the patients are usually still young – of the occurrence of symptoms, an axis correction in addition to arthroscopic joint reconstruction should also be performed to prevent a greater wear of this hinge portion.
An acquired X or O-leg occurs most often due to a one-sided strong knee joint osteoarthritis: Often the O-leg formation in medial (inner) arthritis is to be observed, for example, after the previously frequent total meniscectomy.
In these cases - patients are usually already older - an axis correction must only be carried out if there is a stronger arthritis, and joint debridement including abrasion (see osteoarthritis) has not been successful even after six to twelve months.

Body weight acting mainly on the one side of a hinge portion in the X or O-leg osteoarthritis is evenly distributed by osteotomy on both knee joint portions or transmitted through light (desired) overcorrection more on the healthy joint part. The relieved joint portion can now, supported by arthroscopic measures, cure or at least stop the further progression of osteoarthritis (fourth stage of osteoarthritis therapy). We always combine the adjustment with an arthroscopy. Before the adjustment, the healthy knee part is arthroscopically evaluated if the adjustment is actually possible (X-ray and MRI can quite often give false information – an adjustment would be disastrous if the other part also has severe joint damage). The transition can be combined with an abrasion, a mosaicplasty or an ACI – chondrocyte implantation.

The axis correction is made through a bone cut in the thigh section (X-leg), or lower leg (O-leg), a wedge of bone is removed accurately in accordance with the angle of the desired line and previously calculated correction.

The two bone parts are then brought into the desired angle, or after removal of the bone wedge united by osteosynthesis (bone mount) with a plate and screws.

These angle-stable plates are enormously stable and ease the bone mounting process. They allow a considerably rapid mobilization and a quick use of the operated leg.

Until radiographically apparent bone healing (Durchbau) the leg should not be fully strained (two forearm crutches for four to six weeks). After about a week, depending on the progress of bone healing, partial strain is allowed to about 30 kg.

There is also an intensive physical therapy. After completed restoration of the bone the leg can be fully loaded again. The plate is removed in younger patients (or if it interferes) after about a year with a small intervention. Many patients do not request a plate removal, as it does not bother them.

The full working capacity for heavy physical work exists only after osteosynthesis, usually after three months. Office work is possible after 3-4 weeks.

Sporting activities are dependent on the age, the extent of the cartilage damage and the degree of arthrosis and muscle performance. Please discuss with us before.

The desired axis correction can be achieved in about 95 percent of cases.

Some patients may experience a loss of correction due to bone erosion.

The prognosis of the knee joint is very much dependent on the degree of internal knee damage (see results in the sections cartilage damage and osteoarthritis).

Any operation on the bone can theoretically cause a bone suppuration, although it occurs very rarely. Fortunately, with our patients, no case has yet occurred.

In about 2 to 3 percent of the cases, a bone healing (bone restoration) can fail, so that a renewed osteosynthesis (bone mount) after the "freshening" of the osteotomy must be performed.

With some patients, as a result of bone sintering a correction loss occurs, which, if it does not exceed a certain amount, can be tolerated. In case of a greater correction failure a further operation must be made.

Through the new locking plates, the latter two complications have become very rare. 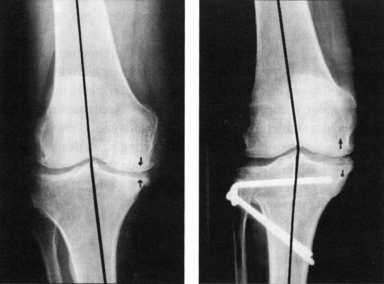 Left: Before the operation, an O-leg with a narrowing of the inside joint space (arrows).

Right: Through the osteotomy an intentional slight X-leg.

Bone assembly (osteosynthesis) having a plate and two screws.

The inner joint space is much larger (arrows).

The sick (inner) area is relieved.

The healthy (outer) area is loaded. 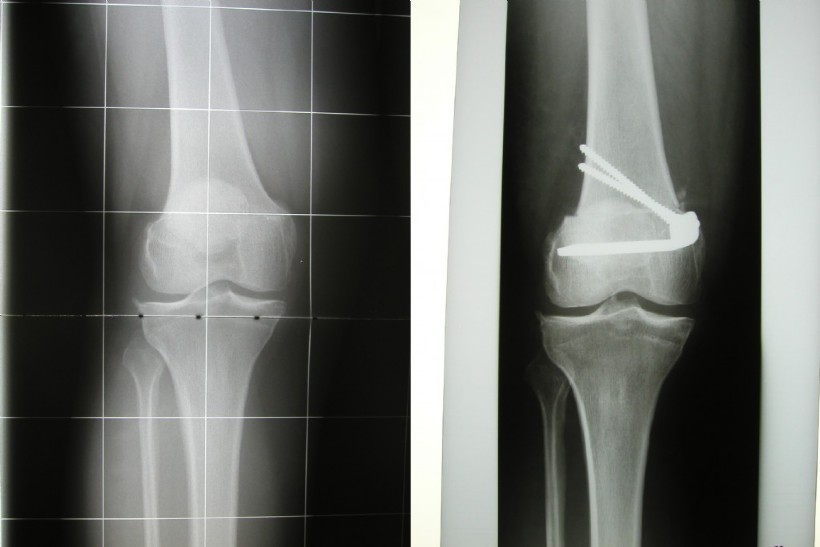 An X-leg is corrected due to mechanical reasons at the thigh. The principle is the same.

Right: After the adjustment a normal leg axis.