The anterior cruciate ligament is an important stabilizer of the knee joint. After a rupture, it can come to slipping and twisting of the thigh bone to the lower leg, due to physical stress, fatigue or loss of concentration.
The patient feels that his knee is unstable and sometimes even eases down ("giving way").
In normal walking on the plain, the knee is however usually unremarkable and not painful.
Due to the "slipping" of the thigh bone, the articular cartilage and the menisci can be injured or damaged . More than usual in medicine, differences of opinion prevail in the treatment of the anterior cruciate ligament (knee), regarding the need for and timing of surgical stabilization and the choice of the transplant and the operation method.

1. The fresh cruciate ligament (up to a week after the accident) is stabilized only (arthroscopic cruciate suture under "ideal" conditions, otherwise primary cruciate ligament), if the examination of an injured knee under anesthesia reveals a dangerous stability deficit (positive "pivot shift") and the patient is suitable for ACL reconstruction, according to his age (under 50 years), his degree of osteoarthritis, his muscle power, his weight and sports activities. If the patient is not suitable, arthroscopy is definitely carried out in fresh knee trauma cases, to remove cross-band residues that can be caught up in the joint motion, and to detect and treat any additional injury to the meniscus or the articular cartilage.

2. Outdated cruciate ligament tears are stabilized under "giving way" conditions, ie buckling during climbing stairs, or exercising, depending on the factors mentioned above.

To treat the cruciate ligament we use the body's own tissue and two tendons of the pes anserinus using a 3 cm cut, which are 2 of 4 tendons that are attached to the inside of the shin bone. This tendon (tendons of the semitendinosus and Gracilis muscle) can be drawn with "impunity", without them wearing off, as the other muscles can later take over their part to a large extent.
The tendons are folded four times, and formed into a stable batch. These tendons are very solid but not as tight as the previously used middle patellar tendon-third, which was too tight. The tendons have a similar behavior as the natural cruciate ligament. They are drawn arthroscopically, instead of the cruciate ligament, and attached to the bone with two clamping screws.
Besides the arthroscopy measures (3 x 5 mm) the previously mentioned 3-cm incision on the front knee is needed.
The deciding point of the cruciate ligament replacement surgery is the precise positioning of the entrance of the graft into the joint (= isometric point), in order to avoid the loosening of the new cruciate ligament or a movement restriction.

In this operation the use of cast immobilization is removed, and a knee brace made from plastic with a movable knee joint and Velcro strip is used (brace) postoperatively for four to six weeks.
This splint allows fairly normal walking.
In the first three weeks the knee should be partially rested with the help of two forearm crutches.
Intensive but gentle therapeutic exercises with simultaneous activation of the muscles of the front thigh and back follow, in order to not compromise the graft.

For office work after one to four weeks, for physically demanding work after about five months.

Cruciate ligament reconstruction with a stable batch of the tendons of the gracilis and Semitendinosus muscles. They are very similar to the natural ligament. 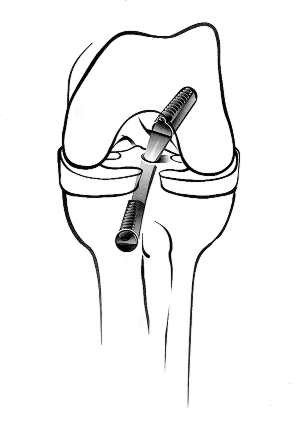 Cruciate ligament reconstruction with a stable batch of the tendons of the gracilis and semitendinosus muscles. They are very similar to the natural ligament.

Ban on swimming, biking, hiking sports for two months, for tennis and squash for about six months, for sports such as football and handball, etc. about eight months.
Important for the decision whether or not to exercise sports are the regained muscle function, coordination and reflex speed.

Full strength and knee joint mobility can be achieved in about 90 to 95 percent of the cases.
In about 5 per cent of the cases, there is a movement deficit in the final position, which can be eliminated by a second arthroscopic surgery (removal of excessive scarring).
About 90 percent of patients return to their sports, 5 percent exercise less onerous sports.

Through the tendon removal, in about 5 percent of the cases, disturbances in sensation below the knee joint occur, which are restored within one to two years.
The other complications are similar to those of other arthroscopic procedures.