The endoprosthesis of the hip is the most developed and most researched joint replacement. Contrary to recommendations from other shoulder and ankle treatments, joint replacements at the hip may be advised even in relatively young and even very athletic patients. Of course, hip conditions should be first treated with conservative methods. And of course a joint-preserving surgery is conducted on joints worthy of preservation depending on age and other factors, for example the hip drilling in the early stages of osteonecrosis (bone tissue loss). As a relatively new therapy ilomedin infusion has proven itself in cases of bone edema (swelling of bones), a preliminary stage of the femoral head necrosis.

The incision was previously - depending on the thickness of the fat and muscle layer - about 18 to 25 cm long.<br></br>For some time now we have used a minimally invasive surgery, in which only a 7 - 10 cm long incision is used. We use the so-called anterior approach, see pictures.

The main novelty of this method is not the incision length, but the fact that the muscles are not cut any more, and that it is operated between the individual muscles. In this approach, the muscles will not be stretched or cut, which means that the healing is much faster, and that the patients can put away their forearm crutches after 1-2 weeks. Some athletic, younger patients don't use the crutches at all.

After opening the anterior capsule part, the femoral head is disposed off. With special milling, which have the form of the artificial acetabulum, the acetabulum is processed. Once you reach the desired size and depth, the corresponding titanium shell is pressed in, which must sit solidly. In the shell, ceramic or polyethylene inserts are placed.

Thereafter the medullary canal of the femur is rasped up. After achieving a good "cortical sit" (the prosthetic shaft is firmly rooted in hard bone), a trial prosthesis is used and the joint reduced (the femoral head is placed in the acetabulum). Then the leg length (differences to about 4 cm can be balanced off well, more length increases the risk of nerve lesion), the joint rotation (how movable are the hips, are the muscles stretched too much or too little, is there a bone on bone collision?), the luxation tendency (an artificial hip can dislocate itself) are checked . At this stage of the operation, much can still be customized. This work must always be performed by an experienced doctor - this can not be performed by a navigation computer nor a surgical robot!

If you believe that everything is correct, then the final shaft is driven in and the corresponding ball head is placed. The shank is made of titanium, the head is made of ceramic. The anchoring of the acetabulum and the shaft is by "force fit" - ie without cement. After careful rinsing and washing of the new joint and the removal of bone fragments and abrasion, the muscle and the wound is closed. Usually we use a bleeding drain. Blood can usually be avoided since the introduction of the new, gentle technique. 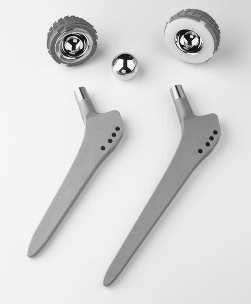 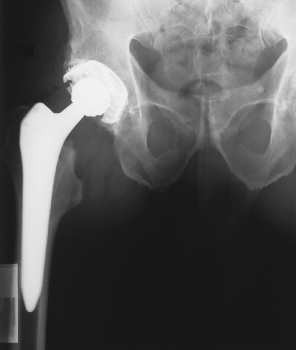 X-ray after the implantation

The bleeding tube (drainage) is tightened a little on the first day after surgery and removed on the second day. The patient can sit on the first day and get up on the first or second day after the operation. The operated hip joint is rested for one to three weeks with two forearm crutches (if this is possible - depending on age, general health). Thromboprophylaxis for at least six weeks. Medicinal prophylaxis of the heterotopic ossification (postoperative ossification of the soft tissues of the hip) for fourteen days. Intensive physiotherapy from the first day onwards and walking training from the second day after surgery. Hospitalization reasonably about one to two weeks. Many patients undergo a rehabilitation stay after an artificial hip replacement.

office work after about four weeks - managers may start earlier. Independent driving should be avoided for about two to three weeks, due to the low car seats and the strong muscle strain when getting in and out. Heavy physical activities can be done in case of well-trained muscles after about three to four months.

Most patients are able to return fully to their sport. Initially, swimming and cycling should be exercised, you can start with light running in about three months. Hip straining sports such as tennis and skiing should be avoided for at least four months.

In our department, most patients receive a cementless total hip made of titanium, which has become operational since 1979 - with only slight modifications. In the meantime more than 200,000 patients have been treated with this system worldwide. Approximately 95 percent of artificial hip joints stay functional for more than ten years. Over 90 percent of the patients are satisfied or very satisfied.

Nerve lesion in one percent, ossification (soft part ossification) in about 3 percent, postoperative luxation in about 2 per cent, infection in about 2 percent, thrombosis in about 5 percent and loosening (after ten years) in 5 percent of the cases. In the case of postoperative luxation, the joint must be immobilized for six weeks. Infection and loosening usually make a revision surgery and a change of implants necessary. 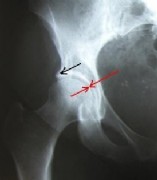 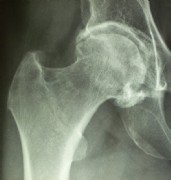 Right: High luxation of the hip. A severe disease, which has evolved from an untreated hip joint disease in infancy: The femoral head (green arrows) has disconnected from the badly scaled acetabulum (red arrows) and plugged up high in the muscles. It builds itself a kind of secondary acetabulum. Normal walking is not possible. Strong leg shortening. I saw the patient in Albania. She did not want an operation. Owing to the routine checkups of infants in our areas, these kind of hip complaints do not exist here. 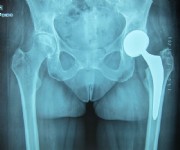 This is the technique we use currently.

Center: Hip joint replacement with a modern total hip replacement using minimally invasive techniques. The average length of the incision is only 9 cm and the muscles are no longer cut in or cut out but just pushed apart.

Joint replacement in hip dysplasia and after pelvic fracture

Left: The left hip in the picture is fine, the right shows a very flat, receding acetabulum and a very short, deformed femoral head. Hip dysplasia is the precursor to the hip dislocation and also evolves from a childhood disease. This patient had a leg length reduction of 6 centimeters.

Right: With the use of a cementless prosthesis the pain was successfully removed and the leg length fully restored. The limp is completely gone.

Left: In severe dysplasia cases, an acetabulum roof must first be formed from and screwed on the femoral head(arrow). Only then in the same session, can the acetabulum be inserted. Here too, the leg length can be compensated. Also this patient reports of no symptoms for many years now.

Right: More "hardware" is needed for pelvic fractures with subsequent total hip replacement. We could bring even this patient back to walking.