You are here: About Michael Vitek MD > Lecture and surgery travels
< > Stop Start

Pictures of lecture and surgery travels 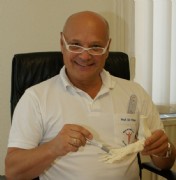 Middle: With Alex Sikorsky and Bulgarian colleagues in Heidelberg

Right: Virginia Vitek with the top foot surgeons Springfeld, Zwipp and Stainsby, in the background Roland Woerner , CEO (together with Uwe Pech) of the company Normed, D-day, Heidelberg

Left: In the operating theatre of the center for outpatient foot surgery in Vienna, interested spectators during a live operation.

Center and right: The operating theatreof the Prague University Hospital during a course . The live image was transferred to the lecture hall, and then questions were asked by colleagues and answered by me during surgery

Center and right: Live surgery during a course in Tuttlingen , participants directly in the operating room and by video transmission in the lecture hall .

Right: The Institute of Anatomy, University of Vienna during surgery exercises .

Left: In front of the Airlangga University in Surabaya , Indonesia, for the first Indonesian foot surgery course, as the only lecturer

Middle: During the subsequent workshop there were 60 participants from all parts of the vast country. Some traveled six hours by plane. Since too little surgical hooks were present, the inventive Indonesians had dinner forks bent into shape. The enthusiasm was tremendous , as nowhere else. The heat also.

Right: Invited to a lecture at the Turkish foot conference.

Left: With two Turkish and one German podiatrists

Middle: Meeting of the operators of the V-tek methods in Weinberg near Stuttgart

Left: Invited as a speaker at the Dutch orthopedic conference in Groningen, the usual transport

Right: A few advertisements in the hotel during the foot seminary in Ohio, USA 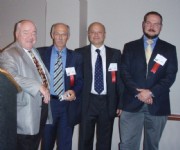 Left: Speakers of the conference in Ohio

Middle: In the following workshop at the College of Podiatric Medicine , Prof. Vitek shows his surgical methods that are practiced by the participants on a corpse

Right: The College of Podiatric Medicine

Middle: The participants see all OPs step by step, before they begin

Right: Then the celebration. This bar in the special bus rolls through the town to the restaurant

Left: Virginia in the operating room in Tirana, Albania

Middle: At the Normed-stand the moods are bright. Foot conference in Carillo , Argentina

Right: flight from Moscow to Tomsk , Siberia. Glad to have survived

Left: The Spartanian OP of the giant hospital in Tomsk, Russia

Middle: No joke : With this sterilized Black & Decker machine I operated on people . The only bad part was the heated oil that became too thin and splashed all over the OP .

Right: In the evening with the hospital director Prof. Karlov and Prof. Felderhoff, hand surgeon from Germany

Left: In Tomsk with Virginia and Karlov's secretary, we called her the "short-stepping Dragon"

Middle: Beautiful wooden houses as the (only) interesting view in Tomsk

Right: The Russian colleagues on a visit to Vienna with my staff

At the Salzburg Schlafgesprächen in the Mozarteum as one of the four invited experts.

Right: Prof. Huber and experts in the television recording.